In Japan, Domohorn Wrinkle is so well known that for many people, it’s more or less synonymous with “anti-aging cosmetics.” Cream20, in particular, has established a solid track record as Japan’s best-selling skin cream. Now, the Domohorn Wrinkle brand is also enjoying the limelight in Taiwan.

This is reflected in its appearances on the hugely-popular Taiwanese TV show “Queen.” Featuring health and beauty products, and covering fashion and make-up stories from all around the world, Queen has a devoted following among female viewers who want to look good. The show is distributed globally, and women of many nationalities look forward to each new episode.

Being featured on Queen has raised Domohorn Wrinkle’s profile even higher.

Thanks to spontaneous word-of-mouth publicity and positive evaluations by the beauty professionals on the show, our brand was shortlisted – from among tens of thousands of candidates – to receive Queen’s top award.

The tens of thousands of competing beauty items were shortlisted by an online voting process, which took account of genuine comments and impressions reported by users. Only the very best entries went on to win awards, as after surviving the opening voting round, the products were then evaluated by the show’s own beauty experts. In short, Domohorn Wrinkle products were assessed as “extremely good” by both regular users and beauty professionals.

Besides the link given above, footage from the show can also be seen on its official website and its official YouTube channel. To see how our products are actually used and what the users think of them, we recommend checking out the comments.

During the evaluation process, our products garnered an increasing volume of spontaneous positive comments. Typical examples were “Since I started using Domohorn Wrinkle, my skin problems have gone away,” “my skin seems to have gone back to what it was like when I was young,” and “several people I know said this brand was good, so I decided to give it a try.” This progressively spread our brand’s reputation even wider. Besides “Queen,” Domohorn Wrinkle products have recently been mentioned by many other Taiwanese media outlets and blogs; in fact, our brand seems to have acquired a sizable fan base among Taiwanese women.

In addition to its home-grown fans, Domohorn Wrinkle is now winning lots of loyal new customers overseas. If you’re thinking of buying our products, why not click on the links above and see what people are saying about Domohorn Wrinkle in Taiwan? 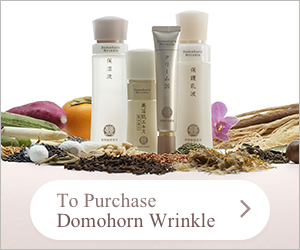